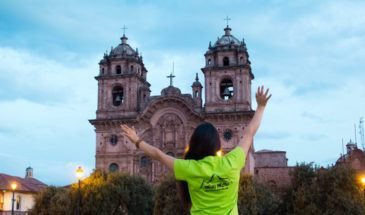 For private tours, start times can vary as per the needs of the clients.

Level: easy. People of all ages are welcome.

For private tours, start times can vary as per the needs of the clients.

Level: easy. People of all ages are welcome.

The Main Cathedral in Cusco was built between 1560 and 1664 out of large slabs of red granite taken from the Inkan site, Sacsayhuaman.  It houses important collections of gold and silver work from the colonial period, elaborate engraved wooden altars, and a beautiful collection of oil canvas paintings from the Cusco School of Art.

The convent of Santo Domingo was built on the spectacular Qoricancha, meaning site of gold.  This was the most important Inka temple in Cusco as it was dedicated to worshipping the Sun God, Inti. It was also an observatory where priests kept track of major celestial events. The walls were lined with solid gold sheets but the fine stonework beneath is all that remains now, because the conquerors looted the temple, taking all of the gold.

This is one of the most impressive sites built by the Inkas.  It is typically referred to as a fortress, however, it is not certain what its main function was.  Current research suggests that it was more likely to have been used as a temple, as Inkan tombs have been discovered in its vicinity. The site is a marvelous archaeological feat, with huge stones used to construct the walls, the largest of which weighing over 300 tons. Even now, after it has been destroyed, one can easily imagine its greatness when it stood in its full glory.

meaning zigzag or labyrinth. This site contains the most impressive carved rocks in the Cusco area.  Although some are difficult to see, some of the carvings that have been identified are of llamas, condors, and snakes. There are several channels on top of the rock, which were probably used for pouring Chicha (a local drink made from fermented corn) through, during ceremonies.  Inside the rock there are a number of caves and passageways as well as an alter which was used for the sacrificing llamas.

meaning red fortresses.  This is a small site and little is known about it. Although the name suggests that it was a fortress, it does not appear to have any defensive purpose.

This site is thought to have been a temple dedicated to worshipping Water. There are some very impressive aqueducts, canals, and waterfalls carved into the stone designed to channel water flowing from a nearby stream.

What you should bring

Every Day Of The Year

We have group trips for ONE DAY TOUR every day of the year. Availability: Make your reservation (reserve at least one day in advance). Take advantage of our group prices and let yourself be enchanted by the magic of the Inca culture.